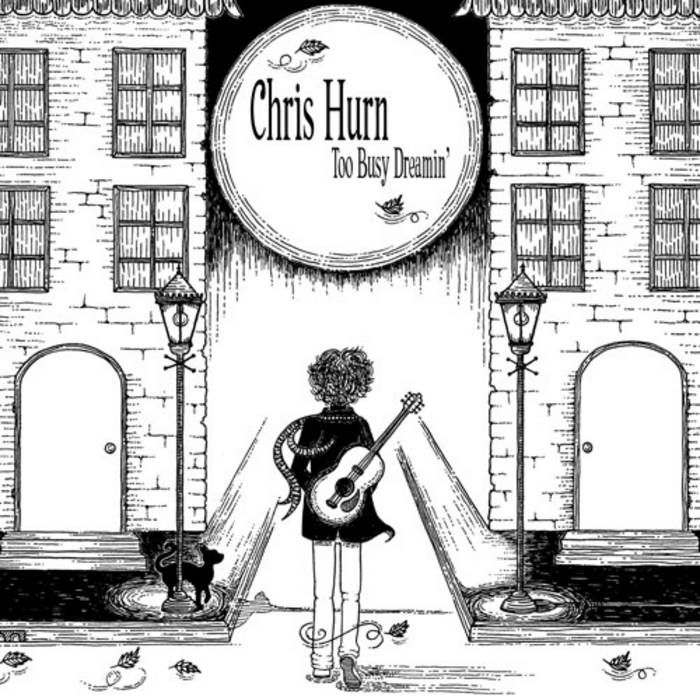 Monkey Records is proud to present Too Busy Dreamin’, the debut album from a major new songwriting talent, Chris Hurn.

Chris Hurn is a twenty-two year old folk-pop singer/songwriter from Lower Hutt, New Zealand. After playing in various local bands, including Play it Strange 2007 national competition winners The Lunch Box Boys, a 60’s style indie-pop band, he discovered a love for folk music and decided to go solo in late 2009.

Inspired by the likes of Paul Simon, Bob Dylan, Nick Drake and Leonard Cohen he began to write a collection of songs that would soon become his first album. Although heavily influenced by his folk heroes, he draws upon a wide range of genres and styles of music. As well as having a soft spot for modern pop and rock, Chris has spent a considerable amount of time soaking up 60′s pop groups, notably The Mamas and the Papas, The Beatles and the Kinks.

Coming from a multi-instrumental background, Chris commenced his musical endeavours at a young age with the piano and a cheap plastic recorder. His first album is heavily based around the acoustic guitar but whistles, clicks, claps, harmonica and harmonies also play a big part in the sound. Astonishingly, Chris plays all the instruments on his debut as well as mixing and producing it himself. His lyric-writing reveals a world-wise maturity beyond his years and coupled with his knack for writing highly catchy melodies, he seems sure to secure himself a place amongst a rising new generation of young singer/songwriters.

Too Busy Dreamin’ was recorded in 2010 in his Lower Hutt home studio, and mastered by Dave Cooley (Serge Gainsbourg, Polyphonic Spree) in LA.

When not playing folk music, Chris works as a composer writing orchestral based scores for video games and films.

While owing a clear debt to Paul Simon, the young Dylan, early Donovan and others in the acoustic singer-songwriter category, this young guy from Lower Hutt just north of Wellington, New Zealand brings a pop sensibility to his writing (the openers here Whatcha Got and Only One I Need hook you immediately) and often a deliberately light touch (whistles, handclaps).
Maybe that is in part due to his background: He played in a pop-rock band The Lunch Box Boys which won the Play It Strange award in 2007 (which means he must have been about 17 at the time). Since then he discovered folk and that lineage of singer-songwriters and has struck out on his own.
What is attractive about Hurn is that rather than indulging in melancholy miserablism which the idiom so often invites from a young and emotionally anxious performer, he has a sharp ear for a melodic hook and that he keeps each song distinctive.
He also has an inviting, warm and believable voice which is persuasive when he get reflective (All I Really Want) or urgent (An Honest Man) as much as taking you along for a ride when the musical mood gets more breezy (Love and Silly Little Things with ukulele, whistling and la-la-la backing vocals).
Sometimes his delivery sails a little to close to Simon's (I'm Doin' Fine) but this is a debut and he's still finding his true voice, and other than when he seems to over-reach (the wordy and dramatic Mean Streets) you wouldn't question the strength of his songwriting. Or that he understands folk-pop which is his natural home.
The closer is an ambitious, eight minute-plus Thank You and Goodnight which might also be his built-in encore.
... you will be hearing more of him, that's for sure.


One of Monkey Records’ latest recruits, Chris Hurn is a multi-instrumentalist from Lower Hutt, who also composes orchestral-based scores for video games and films. With a ’60s bent to his writing, this clever singer/songwriter also plays all the instruments on this debut album which reveals his influences as being from the folk-pop canon of Nick Drake, Bob Dylan and especially Paul Simon, who he can sound uncannily like. Hurn’s music is extremely catchy, especially on Whatcha Got and Day of My Escape, while the introspective folkie in him appears clearly on All I Really Want, a melancholy highlight. Added to the usual folk instrumentation of acoustic guitar are harmonica, ukulele, mandolin, and tea-chest bass, flavouring the tracks with a vintage Pacific-ness that gives a joy to the catchy rhythms. ‘Two Busy Dreamin’ was recorded at his home in Lower Hutt over a relatively brief period of six weeks, was self-produced, and mixed in L.A. by Dave Cooley. While perhaps a couple of tracks too long, it is a great solo folk album and makes me want to play my ’60s folk LPs, which isn’t a bad thing.