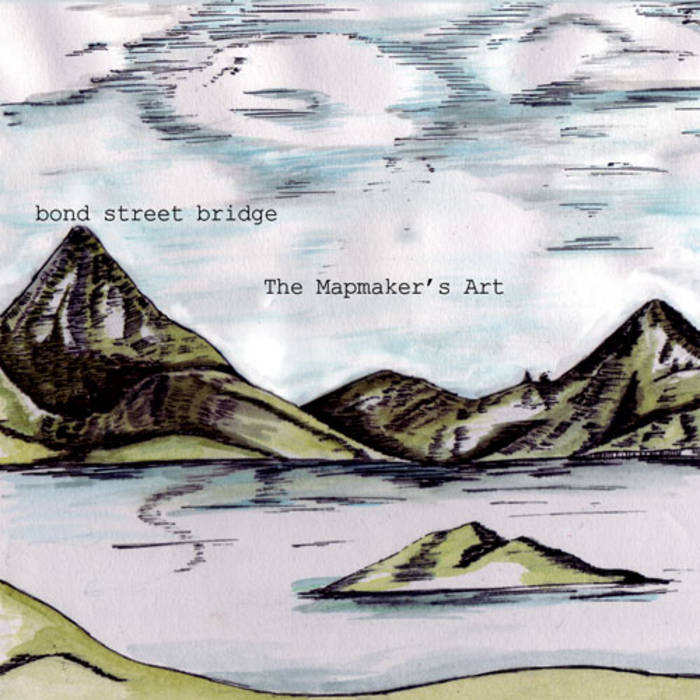 Bond Street Bridge is the creation of Auckland-based multi-instrumentalist and songwriter Sam Prebble. Sam has been playing music for as long as he can remember, and ‘probably before that as well,’ as he puts it. Bond Street Bridge is currently a solo project, but Sam has bas always played in bands, orchestras and choirs. For the past few years he has been playing in the Broken Heartbreakers and Reb Fountain’s Bandits, and has recently guested on releases by White Swan Black Swan, Dylan Storey and Andy Gibson, playing fiddle and writing string arrangements. Sam’s experience in bands and orchestras has developed the strong sense for arrangement and orchestration he brings to his debut album, ‘The Mapmaker’s Art.’ Listening to the lush soundscapes and cunningly interleaved parts on this record, it is hard to believe that it was recorded on a laptop with one microphone, in a falling-down villa next to a motorway.

Working by himself, Sam had the luxuries of time and creative free rein, which he used to craft a unique and original record. The result is an often surprising collection of songs dealing with what Sam describes as ‘the details of daily life – extinct giant birds, storms at sea, pointless wanderings in the desert, demonic temptation and the like.’ This is imaginative and refined songwriting which achieves both honesty and enigma; slightly detached but never cynical, concise but never terse.

The record uses a sonic palette consisting of guitars, violin, mandolin, piano, organs, percussion and vocals, all played by Sam, with double bass on two tracks provided by Wellington-based artist Kate Whelen. These organic and acoustic elements are complemented and supported by glitchy beats, warm reverbs and washed-out tape echoes, producing an overall sound which is at once nostalgic and innovative. Jangly mandolins ride comfortably on top of rolling basslines, and fiddle lines trace paths through a forest of computerised beats.

This album, while fresh and original, pays homage to the artists whose work has influenced Sam over the years. The influence of New Zealand artists such as Demarnia Lloyd and Cloudboy, Bachelorette and SJD, as well as international artists such as Bjork, Beck, New Buffalo, Neko Case, Thom Yorke, Neil Young, Bob Dylan and Leonard Cohen is audible on this record. In creating this work, Sam also drew inspiration from writers, painters and filmmakers, among them Ursula Le Guin, Hone Tuwhare, Bill Hammond, Kurt Vonnegut, Christine Jeffs and Carol Ann Duffy.

The title of the record, ‘The Mapmaker’s Art,’ is a reflection of the fact that most of the songs are about movement, getting from on place to another. Sam says ‘we draw a map to describe a place we’ve been, a place that existed before us and continues to exist without us. The art of the mapmaker is to describe a place to someone else so they can get there and back with a minimum of fuss. Needless to say, most of the places I describe on this album are not really real, but I invite you to come and visit them just the same.’

"The debut album from Aucklander Sam Prebble is one of the finest collections of new homegrown music to cross this desk in a while.The Mapmaker's Art is an album of wistful, pensive stories spread coyly over a bed of introspective indie folk, string arrangements, subtle electronic flourishes and dreamy mandolins. Fans of SJD and the story-telling style of Don McGLashan will find favourite elements of those two esteemed artists entwined on the Mapmaker's Art as Prebble weaves his engaging and curious narrative. The salient track is the bnet single 'black market soul transplant,' a sparse yetyet delicately textured track driven by brooding steel guitar - a great song that laments the "stitches down my side where my soul used to be." The swampy and melodic bluegrass of 'the nature of the blues' is another highlight from Prebble, who mmight be known to music fans through his work with White Swan Black Swan and Reb Fountain's band the Bandits. The Mapmaker's Art is an album that commands attention and will reward the listener with a joyously cinematic listening experience." **** (four stars)


It's hard to believe that Aucklander Sam Prebble (Broken Heartbreakers, Reb Fountain's Bandits) could have created this strange and beautiful piece almost single-handedly. Kate Whelan plays double bass on a couple of tracks, but elsewhere it's Prebble on vocals, violin, guitar, piano, organ, mandolin, percussion, and programmed blips and beeps. Curious narratives about travel and adventure mix with a stream-of-consciousness examination of ordinary things. Evocative musical landscapes stretch back in time to where myth and history meet.


Opening with an arresting, one minute challenge of scraped and stabbing violin you could be forgiven for thinking the one-man band of Sam Prebble who is Bond Street Bridge is being beamed at you from the Contemporary Classical department.

It’ll certainly grip you, as will dark alt.folk drone Black Market Soul Transplant which follows (“the devil got me drunk . . . woke up in the bath full of ice … stitches down my side where my soul used to be”).

And with mandolin, organ, guitars, piano and so on, Prebble conjures up a disconcerting if eerily attractive world of disconcerting images (safety barriers, stagnant puddles), strange sonics and often enticing melodies. And it seems he did all this with a laptop and a microphone.

The Mapmaker’s Art sounds like little else you might have heard in New Zealand music in the recent past, this despite Prebble having been in the Broken Heartbreakers and Reb Fountain bands, and guesting on the recent White Swan Black Swan album.

Many of the arrangements are complex and could have slipped sideways from a contemporary film-noir soundtrack, others effortlessly meld electronic beats and acoustic instruments. And there is a vague sense of alt.country and old time Americana at work as well.

Lyrically Prebble lets chilling phrases slip out: “there’s poison in the packet”; “the snakes all wear rosaries to ward off the evil eye”; “a woman with a ball and chain” . .
It isn’t all so unnerving: Silver has an almost jolly jaunt in its step (although it is about the devil and alchemy), and the quietly melancholy The Nature of the Blues is a standout which harks back to left-field Anglofolk and dark alt.country.

Sleeptalking has an effortlessly somnambulant melody, and Flower Song possesses a stately folk-framed elegance as if to be sung in a dark parlour while the half remembered melody of Bowie‘s Space Oddity floats through the room. Rain is like a conversation with a drifter in a dream. Lovely.

Prebble’s is a unique world and the title of the album is telling: he has created maps of places and emotions, and is inviting you in to explore them. You should. This may be punctuated with a sense of unease, but it is very different -- and very good indeed.


Wine Cellar regulars will doubtlessly know Bond Street Bridge aka Sam Prebble's solo project. This debut album, has that distinctive sound of a man driven, perhaps a little obsessively, perhaps single-mindedly in creating exactly, perfectly, what he has in his minds-ear. Recorded completely on his laptop with a single microphone, in a falling-down villa next to a motorway; the sound beguiles that fact with it's lush soundscapes of guitars, violins, mandolins, piano and organs. The album feels like it has the New Zealand pioneering heritage behind and within it, darkly beautiful in it's ingenuity.


Dear Sam,
I received your debut album, The Mapmaker’s Art, in the mail recently and I’ll be honest, it stayed on the shelf for quite a while. I barely even thought of the overt link between your stage name and the bridge that I drive over every day on my way to work.

It was an e-mail from Nigel at Monkey Records that made me pop your record on – and I now openly admit, I should have done it sooner.

The track ‘Black Market Soul Transplant’ is the perfect encapsulation of your sound. I take my hat off to your ability to blend string arrangements, computerised beats and world-weary vocals into a truly captivating mix.

Clearly your experience with orchestras and choirs has helped to develop your songwriting skills – there is a real sense of lushness in your sound – all the more impressive given the wide range of instruments that you employ (guitar, violin, mandolin, piano and organ to name a few).

The other album highlights for me are ‘Motorways’ and ‘Rain’ – these tracks have been on high rotate ever since I played them.

Great stuff, Sam. I promise that your next release will be reviewed and talked about in a much more timely fashion.


This guy had ‘Neko Case’, ‘tape echoes’ and ‘Kurt Vonnegut’ in his bio, so I had high expectations of Bond Street Bridge, but multi-instrumentalist/songwriter Sam Prebble managed to actually incorporate three of my favourite things into rather a good album.

Wait, fuck that. This guy played violin, guitars, mandolin, piano, organs, percussion, sang all the vocals, and recorded the entirety of The Mapmaker’s Art using one microphone and his laptop. Rather good is a gross understatement. Fanbloodytastic isn’t.

Some smooth double bass is provided on ‘The Nature of the Blues’ by Wellington-based artist Kate Whelan, which shifts things to a more organic place, following the slightly glitchy percussion sounds of the tracks before it. The album more or less continues in the folky vein, with some of the best lyrics I’ve head in new kiwi music this year. Not terribly tough competition though.